I recently received one of the few published versions of the primer, “Seeds Of Friendship: A Duck’s Eye View,” which I wish to share with you. 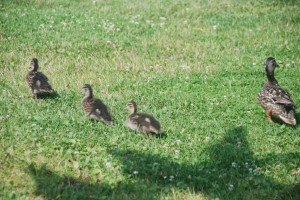 About the ducks. They were mallards and their family joined our family at Brant Lake in early June. In those days, there was a mother, a father and seven little ducklings. The dad was handsome, as is the case with most male birds in contrast to their female counterparts. The father had a glossy green head and a white neck ring. A beauty. His wife? Not so much. Mottled brown. And who wants to be mottled brown? Perhaps the male’s superior appearance was one reason why, shortly after his children’s birth, the father duck left home, never to be seen again. He was probably searching for a younger mate with whom he could create a second family before once again flying off. According to a well-known Adirondack ornithologist, so it is with ducks. Just flying around. Actually, certain human males also follow this pattern.

Every morning the seven little ducklings would wobble up to the bird feeder situated at the edge of my terrace. Over time, both the ducks and our friendship grew. They would eat birdseed while I ate Cheerios. On occasion they strode beneath my feet searching for a stray Cheerio I might have dropped. I would like to go on record that I never invaded their turf hunting for bird seed!

The mother duck played an important role in the daily ritual. With her neck held high she would follow directly behind the little ones, scanning in every direction for intruders who might menace the ducklings. Then, one day I spied the mother duck, not on the ground where she belonged, but on the birdfeeder itself. What could she be doing there? The answer: this mother was attempting to be the perfect parent. Instead of insisting that the ducklings scavenge for their own birdseed, mother duck, with intense passion, and a rapidly moving beak, was shoveling the birdseed from the feeder onto the ground, where ducklings had gathered…A direct hit! Sunflower seeds, corn kernels, pellets of every kind. There was no need for the little ones to hunt for breakfast. I was tempted to warn the mother duck that as a helicopter mother, hovering over her children, she was not doing them a favor. How would they ever become independent if mom was such an enabler! However, reluctant to interfere in family life, I held my tongue, although she refused to hold her beak.

All of the above is meant to illustrate the close friendship I enjoyed with the ducks. In return, they were delighted to be with me. In fact, at one time over the summer I counted 24 ducks surrounding my bird feeder. They came from all over. Schroon Lake, Loon Lake, Friends Lake. An extended family reunion. Not even invited! And, at my expense! There was even one duck with a French quack from Québec!

Then it happened. Summer ended and I briefly left Brant Lake. No one remained to fill the feeder. It was empty. Thus, no food for the ducks. After a week, upon my return, only a lone duck still came to visit. One loyal stalwart of my duck colony. Only one. I treasure this duck because, obviously, it valued friendship more than food. Thank you, solitary duck.

And thank you for the primer that you authored which asks the existential question: are ducks and people only your friends because you give them material gifts? Like birdseed. Or is friendship more than the material? Is it that intangible that comes from the heart such as caring, compassion, knowing that a friend is there for you. Is friendship based on someone, or some duck, with whom you can share Cheerios and birdseed on a warm summer day?

I wish I had the answer to this discourse on the meaning of true friendship and whether or not it applies to humans. or is it just for the birds!

P. S. Several copies of ” Seeds Of Friendship: A Duck’s Eye View” can still be ordered on Amazon in Hardcopy, Paperback or Kindle editions.