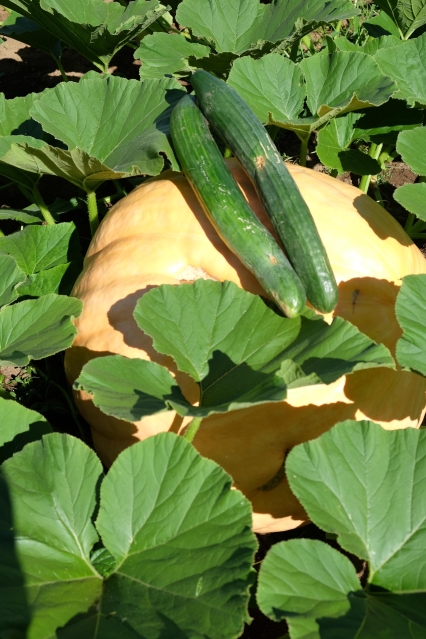 Well, the summer’s over, but when I open my refrigerator door cucumbers tumble out, a remembrance of a season past. And what a cucumber season! I picked 30 or 40 a day. Considered selling them on Route 8. Five cents a cuke. I would even throw in the lemonade. Now, I am considering paying passersby to take a cucumber! Therefore, I feel the necessity of sharing several thoughts on what I have learned from cucumbers.

First, cucumbers promise life’s exquisite adventures of discovery. Once the leaves have spread over the garden the challenge exists to search and find the cucumbers hidden under the leaves. A game of hide and seek.

Permit me to confess. I abhor hide and seek. As a child my mother would invite my playmates to the house and initiate that game. However, I harbored a fear that I might not be found—lost forever under the dining room table. Finally, at the age of 50, a psychiatrist, (preferring to be anonymous), dispelled this anxiety. How? Quite simple. This skilled doctor informed me that after half a century I no longer had to play hide and seek. Cured! Although I admit that, like many people, at any age, there are times when we feel lost in life. I could go into this in greater depth, and might at a future date, but, for the purpose of this blog, I will concentrate on cucumbers.

So, every morning I ventured into the garden, lifted a large green leaf and peered under the leaf hopeful that I might find a cucumber. Fun! Searching! For isn’t all of life seeking after adventure, hunting for the unknown? That is the ingredient that makes the years exciting. If the number of adventures, (and cucumbers), go on and on, preserve them in the refrigerator of your future to cascade out in the days to come.

However, there were days when, for a variety of reasons, I neglected picking cucumbers. Several of these veggies, seeking revenge for my tendency to pluck them from the security of their roots, grew to their hearts content. Not that cucumbers have hearts, which are usually associated with hearts of palm that do not grow in the Adirondacks. Two of these abandoned cucumbers, undisturbed for a number of days, grew to monstrous proportions. I cut them from there vines, loaded them into a wheelbarrow and brought them to my house where I was greeted with scorn.

”Dan, what will we ever do with these cucumbers?” They were too large to cut on the kitchen counter. They stuck out of one end of the grill, And even Toby, age 8, found them impossible to swing in batting practice! What could we do?

I still search for an answer, lost under a leaf of meaning, but perhaps there is a human parallel. When we have problems, we are well advised to nip them while still small. Otherwise they grow and grow and grow until, with the passage of time, they may be too large to easily resolve.

Thus ends this treatise on the wisdom of the cucumber.