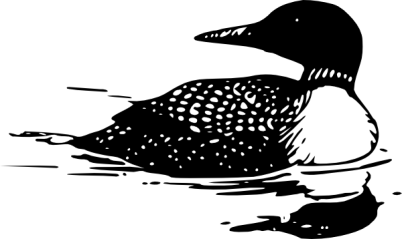 As summer ends, we announce, with great sadness, the death of Kevin the Loon who has departed to unknown depths.

Kevin, the son of Loonette and Loonesta Loon of Mill Pond, New York, a suburb of Brant Lake, passed away suddenly on Thursday, September 1, 2016. There are no known living relatives.

The cause of death remains a mystery, however one theory suggests that Kevin died of looneliness since it lived alone. Statistics prove that humans who have a spouse or partner live longer than single individuals. What is true for humans also applies to loons although current research is inconclusive.

So, did Kevin die of a broken heart? Unlikely, since each day the Kult of Kevin gathered on the shore to greet him. Bob Smith, a local construction worker, commented: “Kevin was the brick that gave me strength to work another day.” Susie Reynolds said,” When Kevin stretched those wings I was inspired to do Pilates and yoga. That bird was an inspiration.” And Rodney Fish added, “If only I could fish as well as Kevin. And he didn’t even use worms!”

By profession, Kevin was a fisherman or fisherloon, selling crayfish, perch and bass that he did not consume to the local village market. Because of Kevin the residents of Brant Lake enjoyed eating fresh fish, together with the endless supply of zucchini overrunning neighbor’s gardens.

No, Kevin was not lonely. This solitary loon was a symbol of the old pioneering spirit of self-sufficiency. In a world where too many souls follow leaders blindly, often unable to think for themselves, Kevin, at peace within, was not influenced by the sounds of the multitude of loons populating Adirondack lakes and was content to dwell in solitude on the Mill Pond.

Kevin’s independence also extended to the world of music. Every Monday and Friday he listened with rapt attention to the bands playing at the nearby bike shop, the Hub. Kevin’s favorite song was Frank Sinatra’s rendition of ”I Did It My Way.” And Kevin did!

On the morning after Kevin’s death a cluster of loons on nearby Brant Lake, all dressed in black, intoned that haunting wail that only loons can make, which, when translated into words, sounds like, ”Where are you? Where are you?” So where are you Kevin? Where are you?

A well-known philosopher once said, ”We don’t know how much we love someone until we lose them.” Not true. Not true. Kevin we loved you or certainly liked you at each morning sighting. Your presence was the most exciting event to happen at Brant Lake since The Great Duck Race!

We miss you. May your spirit fly off to distant lands. F.I.P. Fly in peace.

Contributions in memory of Kevin may be sent to Loons of America, Protect the Mill Pond Association or the charity of your choice—preferably one with an aviary tradition.