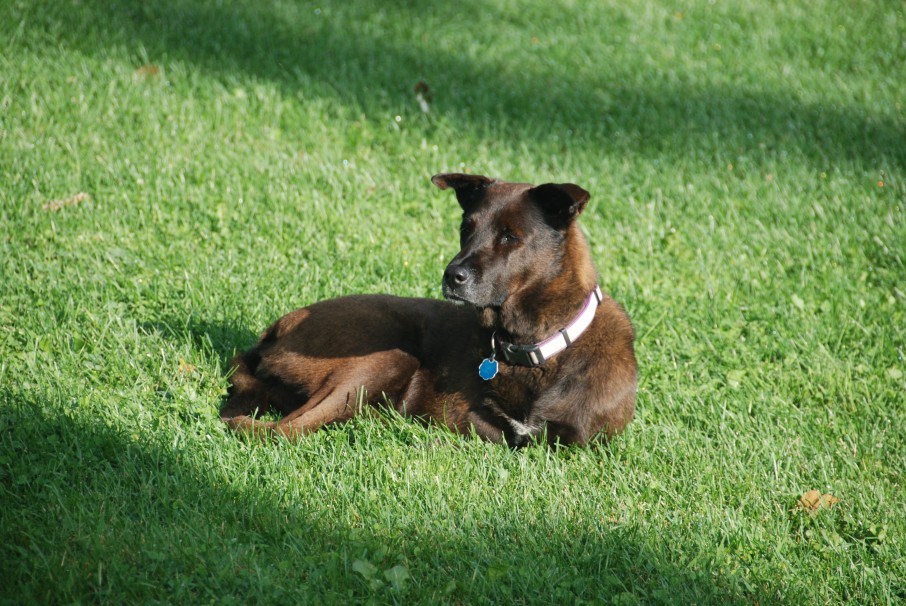 It is my firm belief that no creature on earth loves Brant Lake more than Coco our All-American Mixed Breed dog. As I write, Coco lies on the lawn next to the birdfeeder surrounded by a family of ducks. It is said in the Bible that a day will come when the lion and the lamb will lie down together in peace. This may be problematic, unless you offer up a new lamb every day, but certainly a dog and a mallard duck can lie down together in peace and make love not war—figuratively speaking of course. On the other hand, I do not want to imply that Coco is a pacifist.  Hardly! Whenever Coco sees Blackjack, the farm cat, the pursuit is on, often ending with cat hair in Coco’s mouth.( Please do not show this blog to members of the SPCA.)

So what is our 50 pound, dark brown, curly tailed dog, with a dominant black spot on its tongue doing, as she slumbers on the grass and occasionally swats a fly that has rested on her nose? Dreaming. Dreaming of catching the chipmunk that is hiding in a hole under the stone wall several feet away from Coco. The chipmunk is Coco’s nemesis. In her dream she envisions the day when the chipmunk will surface and, unaware of the presence of Coco, turn our dog’s dream into a reality. I have yet to see Coco come close to catching a chipmunk. Once I did spy Coco hovering over a chipmunk, but the chipmunk was dead. In fact, it had probably been dead long before Coco came onto the scene. In the book, Catching Chipmunks For Dummies the author emphasizes that it is far easier to catch a dead chipmunk, or a dead frog, than one that scampers or jumps. But no! Coco still races on her three legs hoping to capture a living soul.

Which brings me to the crux of my story. The incident that I am about to relate happened on the trail leading onto Grassville Road, above the meadows where horses gambol. Coco had accompanied us on a family walk, disappeared and then returned, her face covered with porcupine needles. Whether that porcupine was dead or alive will never be known but Coco spent many hours at the vet being deneedled. In the days to come, remnant needles burst through the skin creating a dog constantly in pain and an escalating veterinarian bill.

After one such visit I lectured Coco. “Coco, I trust you have learned your lesson. No more porcupines.”

It was six months later that once again Coco had a prickly encounter with the porcupine, this time on Camp Road. At least the veterinarian did not say,” I told you so.”

After leaving the veterinarian’s office, I shook my finger at Coco and asked: “How could you do it Coco? Again?” Coco only looked at me with her sad eyes and went back to licking her wounds.

Yet, in retrospect, although I do not wish to needle my readers, I wonder how many times we humans repeat our mistakes–––if not with porcupines then in some other sticky situation. Over and over and over.

Moral of the story: avoid porcupines.