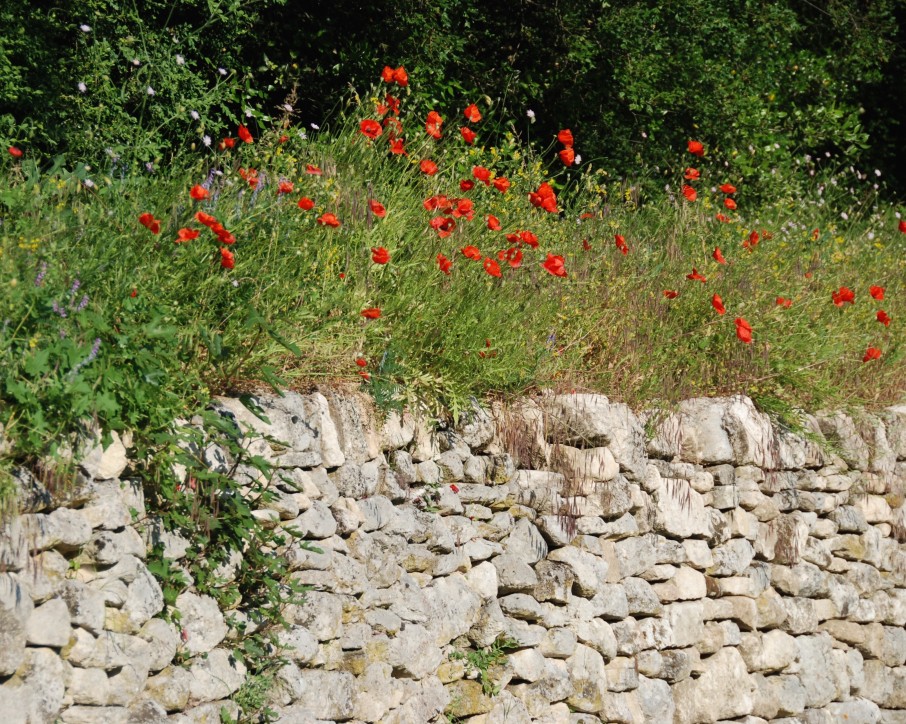 After many years the stone retaining wall of my original home on Palisades Road had disintegrated. I decided to rebuild the wall, and since I had never built a stone wall I followed the various steps outlined by local stonemasons.

”First, you need stones,” they said.  Well, I had plenty of those!

Rebuilding the wall served a dual purpose. The initial motivation was to preserve the hill where I had planted white pines, hemlocks and junipers. Over time the dirt had eroded, advancing on my huckleberry bushes and preparing to cascade into the gazebo at the water’s edge.

However, there was a second rationale for venturing into the world of wall building. At the time that I considered this undertaking I was recovering from a loss and searching for a project to facilitate healing. If I could shore up my wall perhaps I would also shore up myself. This project might create a new beginning after personal erosion.

So I decided to rebuild the wall .

Not an easy task! Whoever had constructed the initial wall had chosen massive stones, rocks that could trace their origin to a time 2 billion years ago when they lay at the bottom of the sea near the equator. In the glacial period they were carried a great distance to form the Adirondack Mountains. These rocks bore the weight of millennia and gathering the stones proved a challenging burden. Carrying each stone to the site expended energy, displaced sweat, and constantly sent me in search of Gatorade.

Finally, I was ready to build. My mentor advised a double wall, one behind the other. Each would be tilted inward with dirt or pebbles to fill the empty spaces between the walls. That would ensure a strong center, without which the wall would never stand. “The core, Dan, the core is everything!” It was necessary to choose the correct rock for each space and although I was in a hurry to finish my wall I needed to be patient—a difficult challenge. Whenever I glanced up I saw water skiers, kayakers and fishermen enjoying themselves on Brant Lake—while I lugged and I tugged. Eventually, after many days, I placed the last of the smaller stones in between crevices. I stood back and admired my work. I had a wall!

And what about my healing process? What had I learned? I realized that as a wall is built stone by stone, rebuilding my temporarily shattered self progressed one piece at a time. With sufficient patience, the self was restored piece by piece.

Coming back can be a heavy burden, until, eventually reconstructed, we emerge, the core of who we are again intact, ready to fend off the forces of sadness and loss.